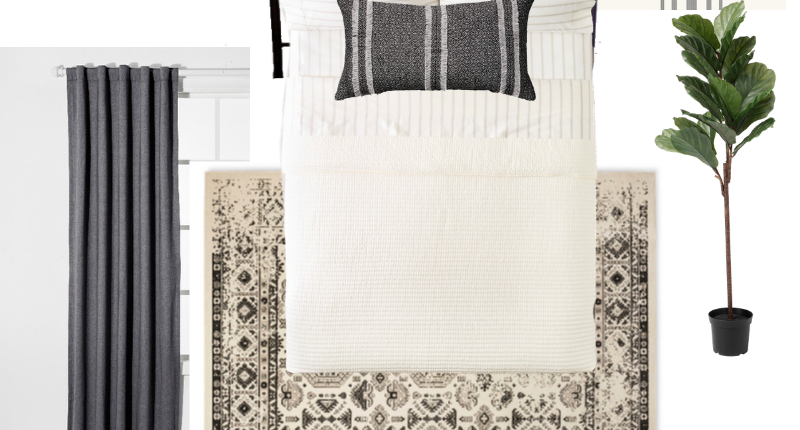 We have been playing musical rooms with the guest room over the past few years. Originally, it was in the “bedroom with the big window”. Then we swapped it to the room next to that so I could use the former as a “Lula” Room followed by craft room. We are about to swap the guest room back to the “window” room. Why this time?

We have always wanted to keep the nursery as a nursery. We want to update Drew to his “big boy” room, and I don’t want him in a room with a giant and low window. So everybody is shifting to the right!

I’m excited about bringing my ideas to life with this one! I’m staying super neutral with black white and grey.

I found a roll of now discontinued wallpaper from the Hearth & Hand line at Target at Goodwill I picked it up thinking I’d use it in the laundry room, but as I started thinking more about it I thought I ‘d prefer it in the guest room. I was already toying with the idea of an accent wall. I was picturing a super dark grey, green or blue; now I’m heading in the opposite direction with this primarily white wallpaper!

I took the roll with me to Sherwin-Williams when we got the paint tinted for the dining room to try to match it to a white paint. Alabaster was my winner! I went ahead and got a can tinted in it while we were there.

A majority of my other findings were found at Target, including the rug, curtains, and throw pillow.

I was thrilled when I saw that they were having a sale on all of their home items over President’s Day weekend; I went ahead and scooped up the rug and the curtains.

The pillow wasn’t available online. At first I was bummed, but then I found it in store on clearance for a great price!

Now I just need to finish cleaning out my craft supplies to start up on this room… I have a feeling that my crafting friends can feel my slight dread on that one!